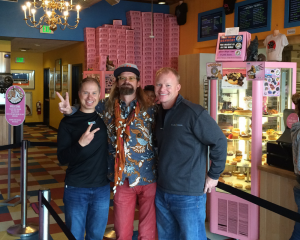 If you have never heard of Voodoo Doughnuts, you must live under a pretty big rock, but if you haven’t, it is a super successful doughnut shop that was started in Portland, OR, that now boasts of four locations and a cart.  Yep, a food cart.  So we could say they have 4.25 locations.  Tres was in Denver, CO to visit their newest store when we were able to catch up with him.  We talked the whole story, but unfortunately, his partner,  Kenneth “Cat Daddy” Pogson, was unable to join us, as he was back making doughnuts in Portland.

The interview is a long one, but one filled with lots of laughs and inappropriate talk, so lock the kids up on this one. 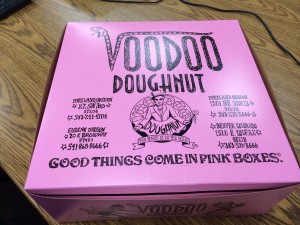 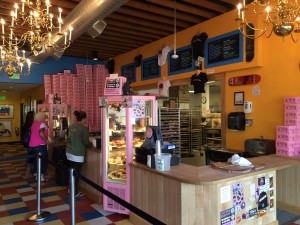 Tres and Cat Daddy were introduced to each other by Tres’ mom, and thought they would always start a business together.  They came up with the idea to start a funky doughnut shop, learned some from pastry chefs at doughnut camp, rented a little  whole-in-the-wall retail location in Portland, and the rest is history.  The two partners did not have any formal business training, but have seen consistent and incredible grown and success, ever since opening their doors 8 years ago.

They have taken a very different approach to business that has helped differentiate them from anything else out there; from performing wedding in their stores, accepting only cash, being open 24 hours, to having a “cock and balls” doughnut that has gotten them much attention…good and bad.

Expanding outside of the Northeast has been a calculated move, and they have been welcomed in Denver with open arms.  From the mayor performing the ribbon cutting, to business coverage in the Denver Post, to having great new neighbors.  Everyone has been excited to have Voodoo come to Denver.

Tres shared with us how they got started, what it was like opening the first shop, what success has allowed them to do, why they chose to call it Voodoo Doughnuts, and some hints into what might be coming down the track for Voodoo.  You are going to love this one.

For the full interview, go to smallbusinessnaked.com

1:24 – Opening Denver
Johnny asked him why did he go to Denver, he answered that he have a lot of memories in Denver, he
lived there in 1970’s, and used to see dead Kennedys somewhere around the 80’s and he said that
there’s a lot of good reason that Denver is a good town, and at the same time Marijuana became
legal. Then Tres talked about a lesbian bar, where it’s beside the dental office. And in the same street
they have everything they need in just one location.

02:42 – About Voodoo Doughnuts
Nick asked to tell them more about Voodoo Doughnuts and What he do, he said that he started it by
himself and his business partner Kenneth Pagson, everyone is calling Kenneth “Cat daddy” he was the
one who gave him that name because he was kind of a ladies man though he’s already married with two
kids. They’ve known each other for 8 years. Kenneth worked for his mother in Imperial Bar in Portland,
then his mom introduced him to Kenneth, then when they started hanging out they talked about rolling
a business, then they talked about opening a doughnut shop because there is no doughnut shop in
Portland, even if he does not even have any idea because he never when he was a kid he always had a
doughnut from Gitzon every Sunday after the church. And had a degree in hospitality. Because of that,
he became the dough and he is the “nut”. He recalled that when they started Cat Daddy was not yet
married but he has a son who all of them was his godson.

7:51 – Branding
Nick asked where did the branding started then Tres answered that Voodoo has a lot of o’s and looked more
like a doughnut, and they perform weddings and they like performing a ritual. Barnes is the guy who
adjourns sweets. Johnny asked about where did the business concept came from, he again narrated that
they were done in night life and everyone loves doughnuts whether young or old people. They started at
$.85c doughnut, and now it’s ranging up to $7. Portland crème is the official doughnut in Oregon. They have
2 stores in Portland, they have food carts in suburban area. They hired kids, they also have

12 – What’s Up: Opposite Day and Focus in your Small Business